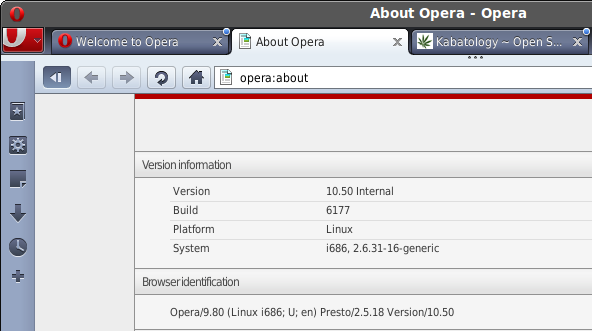 Last week Opera 10.50 pre-alpha was released for Windows and Mac platforms, the Unix version was still in the making and got into the wild yesterday. Opera 10.5 pre-alpha for Unix is now QT libraries non-dependent, so Unix platforms can rclasse Opera without having to install these these libraries;

– you can run Opera without any graphical toolkit installed if you want to (plain X11), but if you do have toolkits installed, Opera will try to load and use them to integrate into the environment. Currently we are focusing on getting support for Gnome/GTK+ and KDE4/Qt4 into 10.5. The work on KDE4 integration is not at a stage yet where we think it can be used, so this pre-alpha release only has support for GTK. As a work in progress, you will notice that not all UI elements conform to their GTK specifications yet.

The Unix build includes Carakan like its Mac and Windows counterparts, but lacks some basic features like printing and drag-and-drop.

Opera 10.50 pre-alpha also has support of the HTML 5 video element – Windows users have it out of the box, Linux users well, you need gstreamer plugins. In Ubuntu its known as gstreamer0.10-plugins-base

This is a pre-alpha release, so handle with care. To download hit the link below.