Ubuntu 10.04 ‘Lucid Lynx’ to include a Manual for beginners 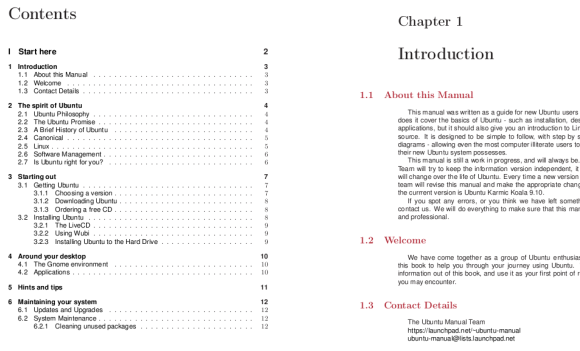 The Ubuntu Wiki seems to suggest that Ubuntu 10.04 LTS code named Lucid Lynx will include a “complete beginners manual for Ubuntu, featuring comprehensive guides, How Tos and information on anything you need to know after first installing Ubuntu.”

The reason behind this move by Ubuntu Manual Team;

As a beginner user once upon a time, I found myself struggling to find useful and easy to understand documentation in an accessible location. The Official Ubuntu Book is great, but it is expensive. The Pocket Guide by Keir Thomas is informative, but doesn’t delve into enough detail in some areas, and is now out of date (written for 8.04/8.10). The Community Docs are excellent, but are not structured and do not follow a consistent writing style. The Ubuntu Help pages inside the Operating System are the best option for newcomers, but are often underused and lack screenshots.

The manual, a single PDF file will be “revised every 6 months to keep up to date with each release”. An early alpha release will be out in February 10th, 2010, followed by a beta release on March 15th, a release candidate will follow suite on April 20th and the final release of this manual will be out on 29th of April 2010.