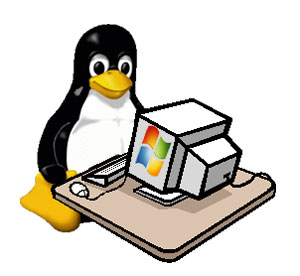 For Windows Users: Apart the rhetoric that Linux is not Windows, how can one gradually get used to this different way of conceiving an operating system? Ubuntu has many killer applications Windows users can benefit from. If you’re stuck in your Windows sphere and do not intend moving out – no problem, it is understandable, but you can still improve your productivity by running Ubuntu and many of its indispensable applications on your Windows OS. This is how;

The fast way: The LiveCd of Ubuntu and other Linux distribution is the easiest way to get started. Live CDs are normal CDs containing a bootable operating system. To make one all you need is a CD/DVD burner, and an ISO file, downloadable from the Ubuntu website. With live CDs you can quickly carry-out a hardware compatibility tests, LAN, Audio,Video etc.

The old way: If done well, it is still an excellent way to get started. It is enough to Google to get as much information as you want. My hard disk looks like this;
1)Etx3 + (2)Swap 3)Fat32 – D 4) NTFS – C; all my documents go to the Fat32 – D partition.
Gparted LiveCD is just what you need to handle simple partition resizing.

The Geek way: Virtualization definitely makes things easier with respect to the dual-boot. With VirtualBox – an open source virtualizer, you can run Windows Vista/Xp and Ubuntu simultaneously – with Windows Xp/Vista as host and Ubuntu guest. When running VirtualBox, you can start up Ubuntu in a separate window, copy and paste from one application to another and transfer documents from one OS to the other via shared folders.

The easy way: No CD burning – no LiveCDs, No partitions, No bootloader(as with the dual boot), just a simple installation – like you’ll do with most Windows desktop application.
“Wubi is an officially supported Ubuntu installer for Windows users that can bring you to the Linux world with a single click”. The performance of Wubi is usually equal to that of a dedicated Ubuntu install. More >>

The most recent way: With MobaLiveCd lets you Linux LiveCds directly from a running Windows without having to boot from it, and without any hard drive installation.

The alternative way: andLinux is an efficient but memory(RAM) consuming way of running your favourite Linux applications on Windows. It doesn’t give you the look and feel of running the Ubuntu OS like the other methods. It has two versions; 665MB version that uses KDE and takes 4.5GB of disk space, and the lighter 143MB version with Xfce that uses 2.5GB. More >> .

[Update]
The new way: Portable Ubuntu for Windows is a free application that runs Ubuntu operating system as a simple Windows application. As the names says, it is portable, so you can carry it along with you on your big thumb drive / pen drive. It is fairly similar to andLinux, it is a standalone, and does not create a new desktop – it uses that of windows.

So howdid you do it,did you use any of the above methods, or full immersion? Let me know in the comments.