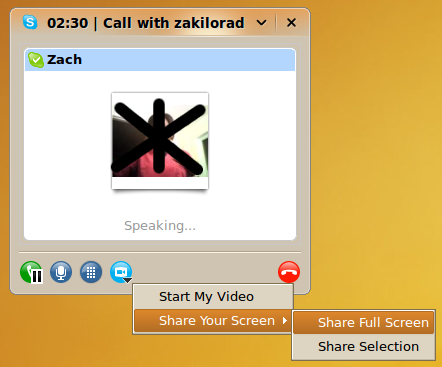 Skype 2.1 beta 1 for Linux finally gets an upgrade, version 2.1 beta 2 comes with a bunch of new features to boost the stagnant growth rate in which Skype for Linux finds its self.
The major feature here is certainly the addition of Screen Sharing, a feature long present in the Windows and Mac versions of Skype. Screen sharing means – you can show your desktop to a Skype contact by simply calling that contact and sharing all or part of your desktop.

Other features in Skype 2.1 beta 2 include; Instant Message Quoting and support for User Interface Styling.
Skype for Linux now supports abuse reporting and has implemented support for localized time formats.

What else!!!
Many know issues are still present in this release though several bugs fixes have been added and minor improvements made.
– The ugly PulseAudio bug is still there; “When PulseAudio is enabled in the audio settings, only that specific entry will be available; to change the settings, use the PulseAudio manager tool that is bundled with your distribution.”
– Sometimes Instant Messages are not ordered correctly.

For more on the known issues move to the Release Notes.