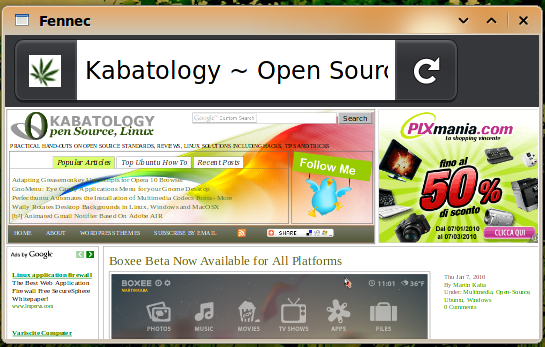 Another step towards a full-fledged Firefox Mobile browser was made yesterday when Mozilla announced a third release candidate for Maemo. Also known as Fennec, and often called Fennec ‘Maemo’, Firefox 1.0 for Nokia’s Maemo platform supports N900 and N810. If you’ve got RC2 installed on one of these, you’ll soon be receiving an update.
An update that fixes several crash bugs, improves page load times and responsiveness but that disables plug-in. “Adobe Flash plug-in used on many sites degraded the performance of the browser to the point where itdidn’t meet our standards”. But Mozilla points out that testers can still manually turn on experimental plug-in support using about:config. Mozilla says its “working on an add-on that will allow the user to have control of which sites to enable plug-ins for”.