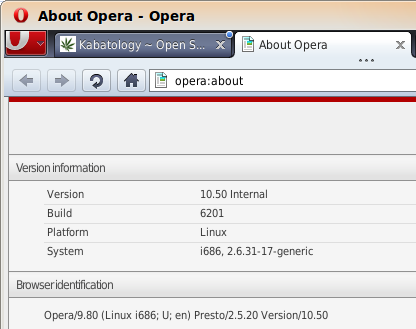 Opera developers have released another snapshot of the upcoming Opera 10.5 web browser. In the previous release, Linux builds were absent, this new snapshot marks the return of the penguin. But Mac and Linux versions of Opera 10.5 are much behind in development with respect to the Windows version. Opera intends to roll-out Opera 10.50 final for Windows first, and then set-off to deliver to the other platforms their ‘finals’.

The current estimates for the remaining work for Opera 10.50 indicates however that we will reach final product quality earlier on Windows than on the other platforms. Such we havedecided to not let Windows users wait for the other platforms to catch up and rather push it out earlier than the rest. You will notice this in the near future as as we will reach the beta milestone for Windows, while Mac and Linux will reach beta around the time Opera 10.50 reaches final on Windows.

Linux builds apart and the return of widgets for Desktop, many of the features in 10.50 are now stable and work like in Opera 10.10. Other highlights of this new build include; upgraded Carakan engine, search box enhancements, bookmark fixes, improved stability, restructuring of the Opera menu, fixes, fixes and fixes — to cut it short, Opera 10.5 Pre-Alpha is all about speed.