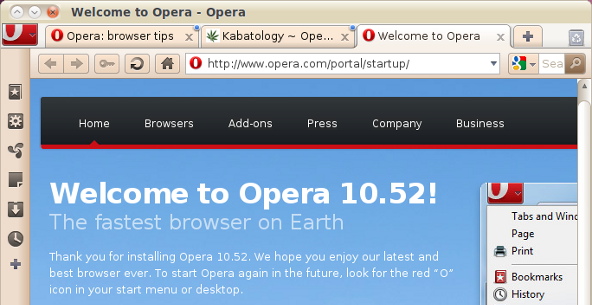 Opera 10.51 (and 10.52) for Linux has been completely rewritten from scratch, with the hope of resolving long time outstanding issues says Ruari, one of Opera’s developers in this blog post. Apart the code overhaul (the .rpm and .deb packages have cleaner post-install and pre-uninstall scripts and the tarball install script is entirely replaced, added uninstall script for tarballs, multiple installations made easy and more), some changes have been made as to how Opera handles its widgets.

and installed widgets can be accessed via Applications -> Other menu.

Formerly Opera widgets needed a running Opera web browser–to run, but as from Opera 10.51 or so widgets began to gain more liberty, allowing for standalone widgets that install and run just like native applications. Certainly not all widgets can standalone, just thinking of a standalone Google toolbar widget, it will be interesting to see how Opera handles such a widget.