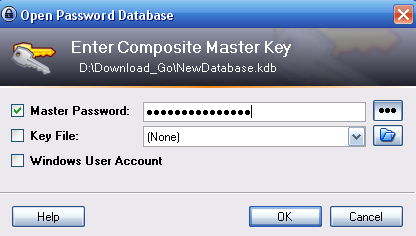 KeePass, the free open source password manager and locker has released version 2.7 Beta for your thumb drive and Windows desktop.
KeePass locally secures your passwords with a single master password and/or a key-file on your PC.
Prerequisites: Microsoft .NET Framework 2.0+ or Mono 2.2+

Many changes or improvements have been made from version 2.6 to 2.7. many of which are bug fixes and new features like;
– The master key dialog now appears in the task bar.
– Improved master password validation in ‘New Database’ dialog.
– The global auto-type hot key has been suppressed.
– Added recycle bin (enabled by default, it can be disabled in the database settings dialog).

Linux/Ubuntu fans can use the less featured KeePassX, — it’s less desktop and more database, and certainly more efficient.
– Both KeePassX and KeePass use the same database format