Top 25 blogs according to Times 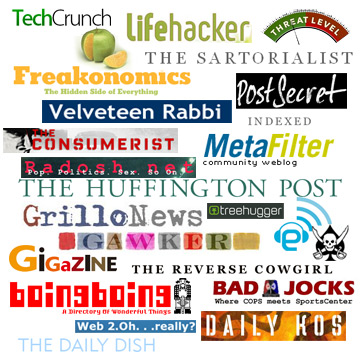 The guys at Time.com said well, lets separate the nonsense blogs from those who make sense, so they searched the web and picked out 25 blogs “about something” from the millions of blogs “about nothing”, and asked its readers to vote their selection.

Well, the outcome… was rather predictable to a certain point; the “crazy” fans of Beppe Grillo pushed that blog to the first place; Frankly speaking, it’s got all to do with fanaticism. Three quarters of what Beppe Grillo writes is just bullshit.

Amongst the many “unclassified” blogs stand-out the many money making bla bla bla blogs like ShoeMoney by Jeremy Schoemaker, John Chow dot com by John Chow, or Problogger by Darren Rowse. It seems the guys at Time dot com don’t buy all those “pseudo money making blogs”

If I have the possibility to add a blog to that list, that blog would be Linux.com. I guess there are still very few Linux fans out there, that makes it difficult for Linux blogs stand-out.

I know why my blog doesn’t feature amongst the 25 blogs; its the 26th 🙂
Which blog would you add or take off that list? Let us know in comments.