Tomboy is a wiki-style desktop note-taking application originally developed for Linux and Unix operating systems, but is now fully supported on Windows and Mac OS X and is very famous amongst Ubuntu users.

This light-weight open source application aims at improving your productivity as it helps you organize pieces of information grabbed from here and there an placed here and there, with wiki-like links,
Case Sensitive search, out-of-the-way advanced editing features and more.

Tomboy notes is a pre-installed in Ubuntu since GNOME 2.16.

So far so good, but I must mention that Tomboy notes is written in C# and runs on cross platform, open source Mono – .NET development framework, a Novell production. For those who say NO to Novell and Microsoft and therefore to Mono (for patent issues) like Roy Schestowitz of Boycott Novell this is a big big issue.
– In the first place, Mono should not even be part of Gnome, they say.

Here is where Gnote practically steps in. Gnote is a port of Tomboy to C++. No Mono, No Novell. 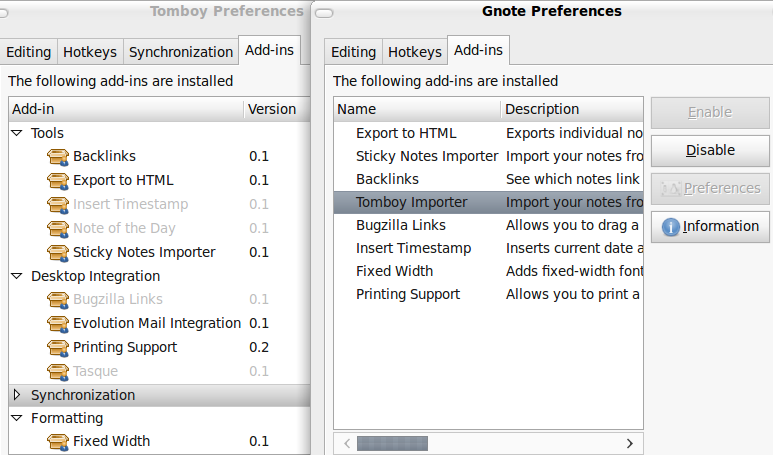 The screenshot above clearly show what plugins/add-ins to expect in Gnote. Gnote has a good number of in-built plugins like Bugzilla links, Export to HTML, Fixed Wclassth, Printing Support, Sticky Notes Importer and the Tomboy Importer ~ Import your notes from Tomboy but unfortunately it lacks Synchronization support, so you can’t sync your notes to Dropbox or UbuntuOne.

What Next: Will Gnote replace Tomboy notes as pre-installed in Ubuntu? Chi vivrà vedrà.

Boycott Novell Ref:
Tomboy is Afraclass of Gnote, Its Mono-free Sibling
New Push for Gnote in Ubuntu by Default