The Miro team has released the first Release Candidate of Miro version 2.5. There is not much information on what Miro 2.5 is supposed to be, but it seem much emphasis has been made to make Miro faster to launch and easier to hack on.

This open source, free HD video player has packages of version 2.5 rc1 for Mac OSX, Windows and Source code for those interested in compiling. For now there are no RPM or DEb packages for Linux

I tried compiling it on my Ubuntu 9.04 and it went pretty well. 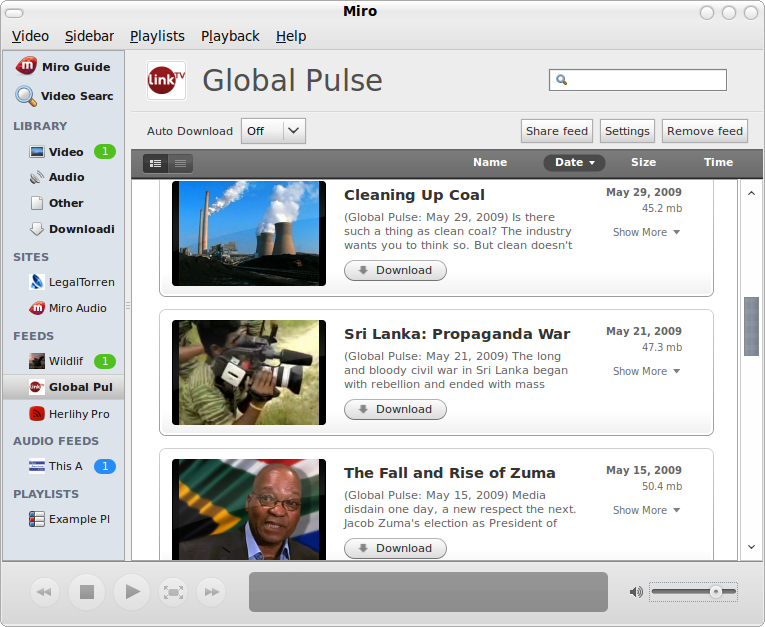 The main point is dealing with the dependencies given that Miro 2.5rc1 does not support for now python 2.6 or python 3.0
Anyway this code below was made available by the team to fix dependency issues. Copy and Paste into a terminal.

Now download Miro 2.5 rc1 to your Desktop, unpack and move into the gtk-x11 directory. Whilst there run ./run.sh

If all goes well, Miro 2.5rc1 will be compiled and installed.

The instillation places a Miro Internet TV link in the /Desktop/Miro-2.5-rc1/platform/gtk-x11 folder from where you can launch Miro. If the link is bad, then just double-click the run.sh file.

I guess that’s all.

To install on under version of Ubuntu like Ubuntu Intrepid: this is what you need: