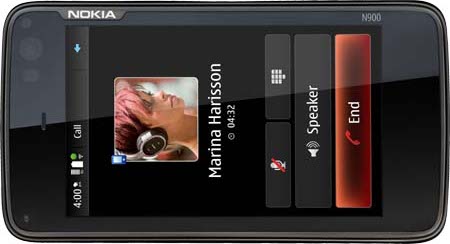 Nokia lets go the N900, its first Linux-Based Phone. It’s move from its usual Symbian OS to the Linux-based Maemo will give the new N900 a more “PC-like experience” -- letting users run dozens of application windows at the same time. ”

“Messaging is quick with the slide-out QWERTY keyboard. It has 32GB of storage, which is expandable up to 48GB with a microSD card. For photography, the smartphone has a 5.0-megapixel camera with Carl Zeiss optics. ”

“The N900 uses ARM’s Cortex-A8 processor and features a high-resolution WVGA touch screen. Its browser is powered by Mozilla technology so Web sites look the way they would on a computer. ”
-- I guess Mozilla technology the mentioned in the notes is Mozilla’s Firefox Mobile Fennec Maemo browser.

via [ Mobiledia `~ Nokia Unveils the N900, its First Linux-Based Phone ]