[Updated screenshots]
It took 1 year and 2 months for Skype 2 for Linux to get an update. Sorry, to say it, but its not fair treatments if you think that Skype for Windows is at version 4.1.

What’s new on Skype 2.1 beta for Linux
Amongst the several incoming features in this beta stand-out four; 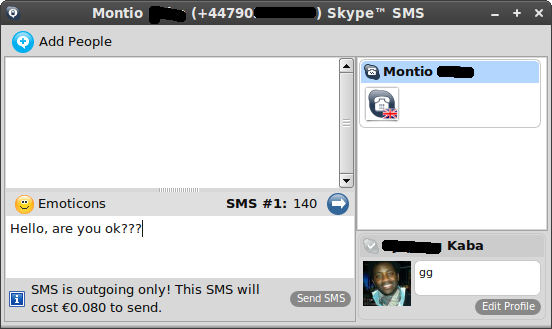 – SMS sending support ~ Already in Skype for Windows. Linux users hand to use third party scripts to get this done. Before Skype 2.1 beta for Linux was released, sending SMS with Skype in Linux was done this way: How to send Text Messages with Skype for Linux on Ubuntu

– Typing notification in chat ~ Like in other IM clients say Messenger, you are informed if your contact is typing in so you can wait for your turn.

– PulseAudio support ~ for Ubuntu .10 users that use PulseAudio Sound Server instead of Alsa, that means better sound quality.

Skype 2.1 Beta For Linux is a faulty beta with several known issues: