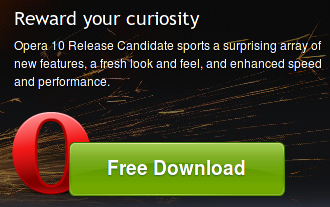 Opera 10.0 release candidate 2 is an unexpected update of Opera 10 Release Candidate. The update is out to repair important crash bugs and tries to fix issues regarding NSL – Never Stop Loading web pages.

Release candidate 2 does not come as an automatic update, you’ll have to download it directly from the Opera website.

Other fixes include; Stability fixes, native skin fixes, icon fixes for Windows and Unix, imported widgets should work when upgrading from Opera version 9.64