MozSwing – A smart browser built on XUL and Java Swing 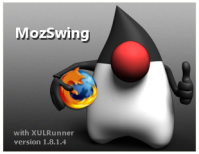 The MozSwing project seeks to integrate Mozilla’s XUL framework with Sun’s Java Swing GUI framework, the result is a prism-like browser called MozSwing that can be download as a JNLP(Java Network Launching Protocol) file.

Running the jnlp file will also run an extension-installer that will install platform and OS-specific XUL libraries in your Java Web Start cache. So your platform needs Java Web Start — which is automatically installed together with Java Runtime Environment (JRE).

The advantage in using the MozSwing approach is that, you have both rendering and scripting access from a Swing application to almost any XPCOM components that can be embedded in a Mozilla browser – browser plugins.
MozSwing plays Flash right out of the box, if flash is installed for Firefox.

Installing MozSwing in Windows is pretty easy, so far as you have JRE on and running.
In Ubuntu Hardy, JRE for Ubuntu may not be enough because Java Web Start launches the installer but fails to launch the jnlp file with the subsequent error “Java Web Start – Launch File Error”

MozSwing is triple-licensed: MPL 1.1, GPL 2.0and LGPL 2.1.
The MozSwing project is currently funded by Concord Consortium.

Authors Notes: Fear not jnlp files. The Java Web Start allows application to be started directly from the Internet using a web browser. Alternatively, an application could be started from local computer using a JNLP file (Java Network Launch Protocol file) which is often about 3-5Kb in size.

The Java Web Start caches the entire application locally on user’s computer. Thus, subsequent launches are almost instantaneous as all the required resources are already available locally. Every time the user starts the application, the Java Web Start component checks the application’s website to see if a new version is available, if so, it automatically downloads and launches it. So Java Web Start guarantees that the user is always running the latest version of the software eliminating complicated installation or upgrade procedures.
Download MozSwing