Super OS 9.10 is a Jam-Packed Ubuntu 9.10 with many Updated Ready-to-Use Applications 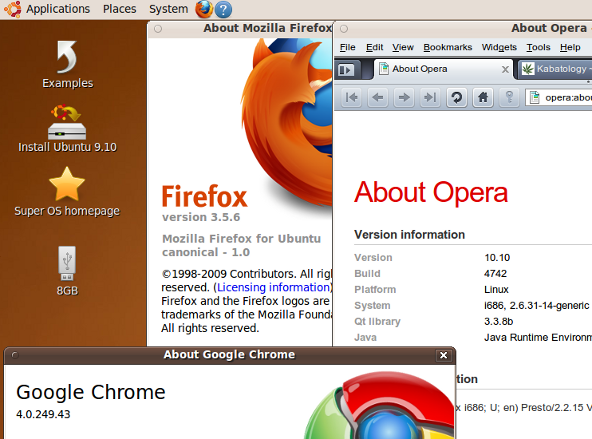 Super OS 9.10 (formerly Super Ubuntu) is jam-packed version of Ubuntu 9.10 ‘Karmic’ for those who prefer to have Ubuntu 9.10 with a multitude of updated usable applications immediately after installation. This certainly makes Super OS heavy, in fact it is download-able as a Super OS 9.10 DVD that weighs approximately 1.05 GB.

So whilst Canonical intends dropping Gimp from Ubuntu 10.04 ‘Lucid’ CD with the primary aim of gaining more space on the CD. The secondary aim if you care is; Gimp is said to be too complicated to be of interest to the average user – the guys at Hacktolive.org who develop Super OS 9.10 don’t give a damn about space, their Super OS is patched with over 169 updates for a more stable Ubuntu.

What else would you find in Super OS 9.10 that is not present in Ubuntu 9.10 LiveCD?

On the road Linux users should consider using up-to-date and more secured Super OS 9.10 LiveDVD on their PCs. If for any reason I find it necessary to do a clean install of Ubuntu 9.10 then I’ll certainly use Super OS 9.10 to spend less time installing all my favourite apps.