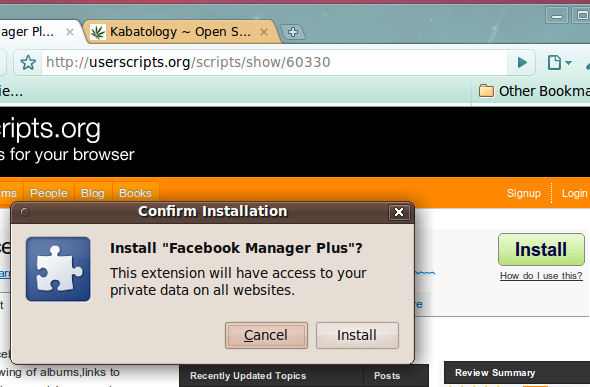 Many years back, Aaron Boodma wrote the Greasemonkey extension “exclusively” for Firefox, now working with Google, he has bent and twisted Greasemonkey so well that thousands of user scripts written in JavaScript now natively work in Chrome – just like any regular Chrome extension. Its a big smack to Firefox, if you consider that its even easier to get user scripts working in Chrome unlike in Firefox where you have to install the Greasemonkey add-on then get the script.

Of the over 40,000 user scripts out there that add to the long list of “official” Chrome extensions, Aaron says only about 15-20% won’t work, because of differences between Firefox and Chrome.

User scripts work on any Chrome 4.0 and higher – only Windows has a stable version of Chrome 4.0, Linux and Mac OS X still have beta versions.

Opera browser users can also try user scripts, but in the case many don’t work and when they do work they might not be as efficient as in Chrome or Firefox. Opera users can also use the UJS Manager that installs userscripts in Opera the Chrome-way.