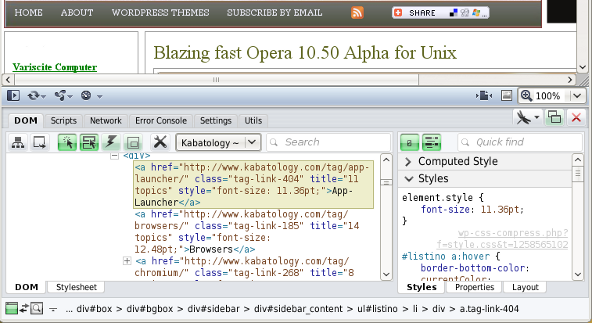 In announcing Dragonfly’s freedom Dave Storey – head of the company’s Open the Web initiative said that “since the previous version of Opera Dragonfly, a lot of work has gone on behind the scenes replacing the existing architecture with a modern version of the Scope Protocol – STP-1. Opera Dragonfly has been rewritten to use this faster and more efficient version of Scope. Now that we believe that the underlying protocol is stable and performant, and a public desktop build has been released with this included, it is time to put Opera Dragonfly on a public Mercurial repository.”

He further went on to say in this blog post; “this is Opera’s first full open source project, so there will be a learning curve. We ask you to bear with us while we get everything up and running and policies in place. Coming from a closed source background there are some hurdles to overcome, such as the current bug tracking system being on a closed server. We hope to migrate to an open bug tracking system as the project gets on its feet.”

You can grab the source code here, and documentation here.

Dragonfly is Opera’s alternative to Mozilla’s Firebug – its the Opera browser’s Firebug. Like Firebug it lets you deconstruct the webpage currently loaded into Opera browser to get a better idea of how HTML headers, CSS, JavaScript, and the DOM needs to be modified to work properly. It runs inside the Opera browser, no widgets (plug-ins) needed and can be activated by clicking Tools -> Advanced -> Developer Tools in the Opera menu bar.